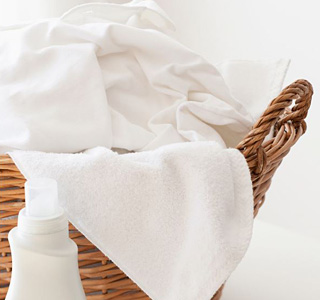 DRYING TOWELS after washing
•   Hang towels up to dry after each use. Even if you only used a towel lightly, you should hang it up to dry in an area with good air flow, away from steam. Spread it out so there are no bunches and each part of the towel dries evenly. Proper drying after uses reduces the chance of mildew and increases the towel's life span.
°   Do not hang one towel over another if either of them are still damp. Each towel needs to be fully exposed to air for proper drying.

•   Dry towels immediately after washing. The longer you let your towels sit around wet, the more chance mildew has to grow on your towels. Dry the towels immediately after you're done washing them to keep them clean. Note that hanging up a towel to dry may take several hours in humid or cold conditions, but as long as they are spread out in an area with good air flow they should be fine.

•   If using a dryer, set it to according to towel material. Most towels are made from cotton and should be dried at high heat. Linen towels and towels with a fragile decorative trim should be dried at a cool setting when using a machine.
°   Always remove lint from the lint trap before starting your dryer. A build up of lint could cause a fire.
°   You do not need to sort towels by color when using a dryer. You may include them in a dryer load with other items, but there's the possibility a towel will trap a piece of clothing and prevent it from drying. 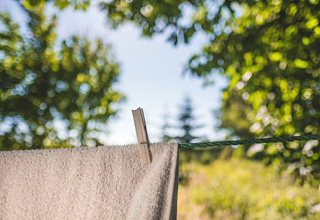 •   Do not put the towels in the dryer longer than necessary. Keeping towels in the dryer after they are already dry will damage the fibers and weaken your towel. Check on small loads before the cycle is finished, simply by opening the door. If they're already done, cancel the drying cycle and remove the towels.
°   If your towels are slightly damp at the end of a drying cycle, it may be more economical to hang them up to dry as described below instead of running your dryer again. If you do start another drying cycle, check on it halfway through to see if the towels are dry.

•   Use dryer sheets sparingly. Dryer sheets are used to soften your clothing. Much like fabric softener, dryer sheets will create a waxy finish on your towels that interferes with their ability to absorb water. If you still want to use dryer sheets for softer, fluffier towels, limit yourself to using them once every three or four loads.

•   Hang clothes in an airy, warm location to dry. If you don't have a dryer, or your towels came out slightly damp from the dryer, you can spread them out over a clothes horse, on a clothesline, or on any clean surface with enough room. If you are used to dryers, air dried towels will initially appear stiffer, but will soften immediately when they touch water.
°   Air flow will help dry your towels faster. Pick a breezy location outside or near an open window, but be sure to fasten your towels securely against wind with clothespins.
°   Direct sunlight is best for drying towels and reducing germs.
°   If no sunlight is available, put your towels in front of (but not on top of) a heater. You could also place them above a heating vent. 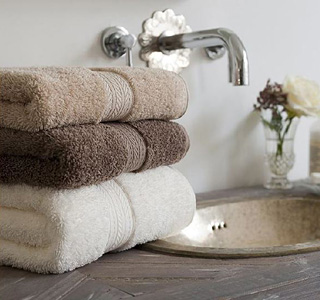 •   Only use an iron on linen towels. Do not iron towels made of cotton, or other fluffy towels. Linen hand towels may be ironed if you would like to make them smooth and crisp. After ironing, they may be folded and stored like any other towel.

•   Only store your towels when they are completely dry. There should be no hint of dampness when you touch a dried towel; if there is, you may want to hang them up to dry for another hour or so. When they're ready, fold them several times until they fit comfortably on a shelf without bunching up or getting wrinkled.
°   Consider using your towels in rotation to avoid wearing them out more quickly. Alternatively, save your nicest towels for guests and use the rest for everyday purposes. 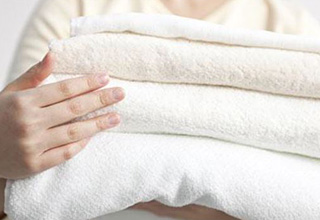