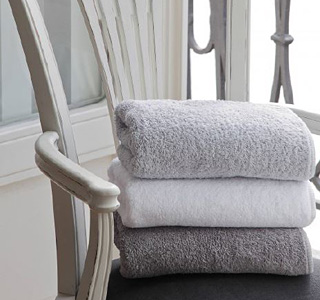 WASHING TOWELS
Washing used towels every week is important to maintain good hygiene and freshness. Towels that have been washed and dried properly will stay mildew-free for longer, saving you money and shopping time. The instructions below can be applied to hand towels or bath towels, with or without a washing machine and dryer.
•   Wash used towels about once a week. Some manufacturers and home advice columnists recommend washing your towels every three or four days, but if your towels are kept in a ventilated area away from steam, you can keep them fresh with a wash once every week or so.
°   If your towels develop a new smell, or if you live in a damp climate where mildew thrives, you should wash your towels every few days.

•   Wash towels separately from other clothing (optional). Towels tend to absorb colors of other clothing, shed lint, and trap smaller clothes items, which results in a less effective wash. While it's fine to mix loads if you'd like to save money, time, or energy, be aware that a separate towel load will produce best results.
°   You may wish to wash your towels separately if you used them to clean up a particularly filthy mess, so you don't expose your clothing to stains or germs. 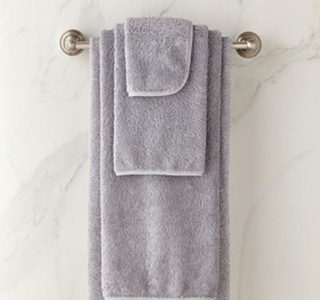 •   Sort laundry loads by color. White and light colored laundry items will become discolored if washed with dark colored items, while the dark items will fade over time. Towels are especially absorbent, so if you want to maintain their appearance you should only wash them in separate light and dark loads. This is especially true of new towels.
°   Colored towels should only be washed with the light load if they are faint pastel or pale yellow in color. Otherwise, wash them in the dark load.

•   Wash new towels with special care before using. Wash them before using to remove special softener that manufacturers use to improve appearance, since that substance makes the towel less absorbent. Because new towels are especially likely to lose their color, use half the usual amount of detergent and add 1/2 – 1 cup of white vinegar (120 – 240 mL) onto the towels to minimize later color bleeding.
°   If you wish to be especially careful, use this vinegar method the first two or three times you wash a towel.

•   Wash towels with half the usual amount of detergent. Too much soap can damage towels and make them less fluffy. If your load only contains towels, use half the amount of detergent recommended by the manufacturer. If you are washing luxury or extra delicate towels, be sure to use a detergent labeled mild.
°   Detergent typically goes into a tray labeled for this purpose, or is poured directly into some top-load washers.
°   Use an ordinary amount of detergent when washing towels in a load with tougher clothing, or if the towels are heavily soiled. Instructions should be included on the packaging of your detergent. Many liquid detergents have a cap that can be used as a cup, with a line indicating the recommended quantity to use for a typical load.

•   Learn which temperatures are suitable for which towels. Most white and light-colored towels should be washed in hot water. Most dark towels should be washed in warm water, as hot water can make them bleed.However, if your towels are linen or have a decorative trim or delicate fibers, a cold wash will preserve them best.
°   You may still need to wash delicate towels on warm instead of cold if they become heavily soiled. The hotter the water, the cleaner and more sanitized the towels will be. 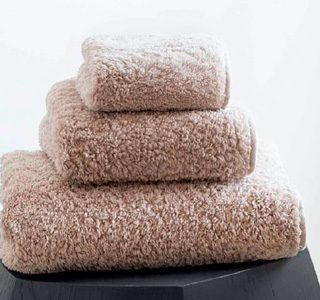 •   Use fabric softeners sparingly or not at all. Fabric softeners are optional additions to your laundry load that are typically added in a special tray, separate from your detergent. While they make your clothing supple and soft, they will decrease the absorbency of your towels. Only use fabric softener if you are willing to sacrifice your towel's life span for greater fluffiness, and only do so once every three or four washes.
°   Consult your washing machine manual if you cannot find the fabric softener tray.

•   Sanitize the towels every third or fourth load with non-chlorine bleach or white vinegar. Add 1/2 cup (120 mL) white vinegar to the detergent once every few loads to keep your towels free of odors and mildew. For a more heavy-duty sanitation, you can use 3/4 cup (180 mL) non-chlorine bleach instead, making sure to use color-safe bleach if your towels are dark in color.
°   Bleach should be placed in the tray labeled for this purpose. If your top-load machine does not have a bleach compartment, mix the bleach with 1 quart water and pour into the machine 5 minutes after the load began .
°   Vinegar is best added during the final rinse when used for this purpose. Pour it into the fabric softener tray, or simply open a top-load washer near the end of the wash and pour it in directly.

•   Shake your towels slightly between washing and drying. When you remove your towels from the wash, give them a small shake to keep the surface fibers fluffy and absorbent. See the Drying section below for instructions on how to dry your towels. 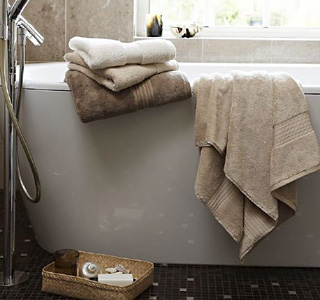